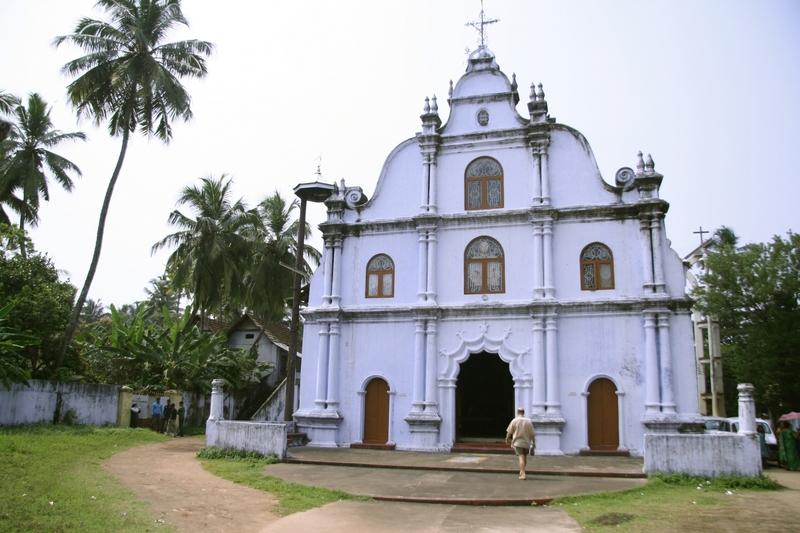 Vasco da Gama, who discovered the sea route from Europe to India, landed at Kappad near Kozhikode (Calicut) in 1498.He was followed by Pedro Alvares Cabral and Afonso de Albuquerque. They built Fort Emmanuel at the Fort Kochi Beach with permission from the Raja of Cochin. Within the fort, they built a church with a wooden structure, which was dedicated to St. Bartholomew. The neighbourhood is now known as Fort Kochi.

Francisco de Almeida, the Portuguese viceroy, was allowed, in 1506, by the Raja of Cochin to reconstruct wooden buildings in stone and masonry. The wooden church was rebuilt, presumably by the Franciscan friars, with bricks and mortar and a tiled roof was erected. In 1516, the new church was completed and it was dedicated to St. Anthony.

The Franciscans retained control over the church till the Dutch captured Kochi in 1663. While the Portuguese were Roman Catholics, the Dutch were Protestants. They demolished all the churches except this one. They reconditioned it and converted it into a government church 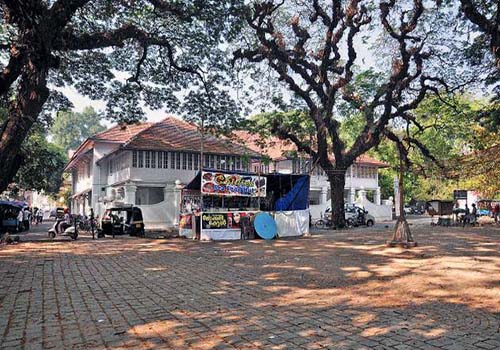 Kochi, the commercial capital of Kerala, the last port of Vasco Da Gama, where you will find synagogues, mosques, churches and temples side by side, is a place with a fascinating history. The huge cantilevered fishing net, the Chinese fishing nets, seen here is a legacy of its spellbinding past. The nets, set up on teak and bamboo poles, were brought by one of the first visitors to the Malabar Coast, the traders from the court of Kublai Khan.

An ideal place to watch fishermen use these nets is the Vasco da Gama square, a narrow promenade along the beach. The square, which has numerous stalls serving fresh delicious seafood, tender coconut and so on, is also perfect for a nice, relaxed evening. 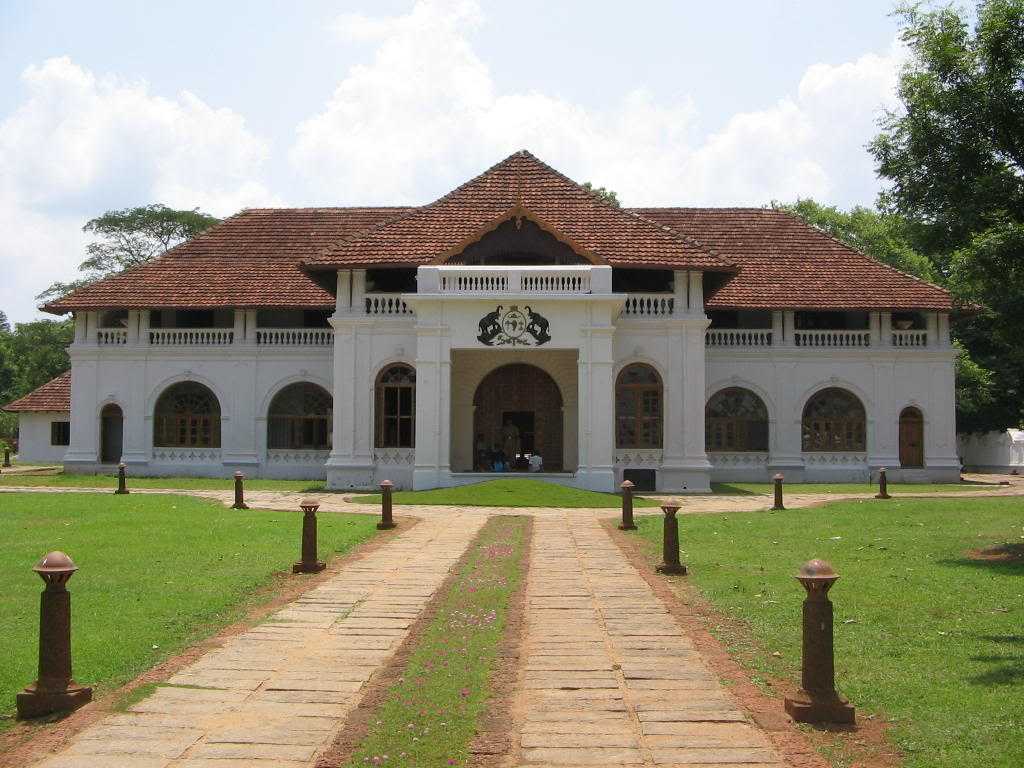 The palace is a quadrangular structure built in Nālukettu style, the traditional Kerala style of architecture, with a courtyard in the middle. In the courtyard there stands a small temple dedicated to 'Pazhayannur Bhagavati', the protective goddess of the Kochi royal family. There are two more temples on either side of the Palace, one dedicated to Lord Krishna and the other to Lord Siva. Certain elements of architecture, as for example the nature of its arches and the proportion of its chambers are indicative of European influence in basic Nālukettu style.

The king's bedchamber or Palliyara, to the left of the entrance and occupying the southwest corner of the Palace, is noteworthy with its low wooden ceiling and 300 sq ft (28 m2) of wall surface covered with about 48 paintings. These illustrate the Ramayana, from the beginning of the sacrifice of Dasaratha to Sita's return from captivity in Lanka. The paintings in this section are the earliest in the palace, dating back to the 16th century. The last five scenes are from the 'Krishna Lila' where in a cheerful God Krishna using his six hands and two feet to engage in foreplay with eight happy milkmaids.The paintings are attributed to the artistic bent of mind of Veera Kerala Verma. 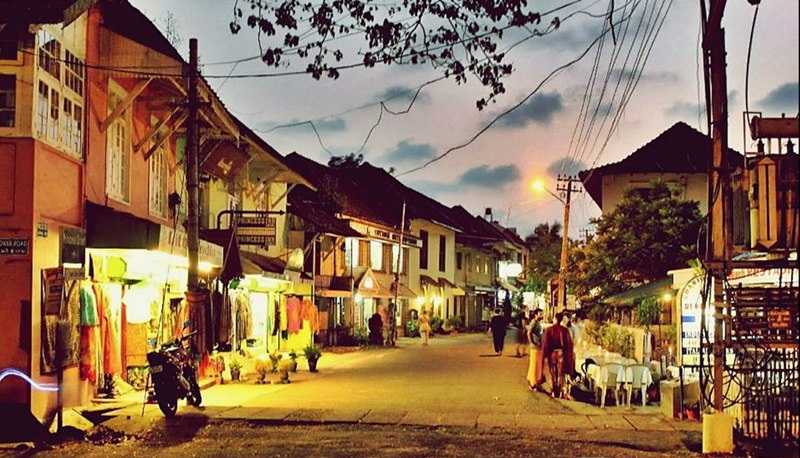 Loafer's Corner, also known as Princess street is one of the earliest streets to be constructed in Fort Kochi, Ernakulam. Princess Street with its European style residences still retains its old world charm. The best view of this quaint street can be had from Loafer's Corner, the traditional meeting place and hangout of the jovial funloving people of the area. 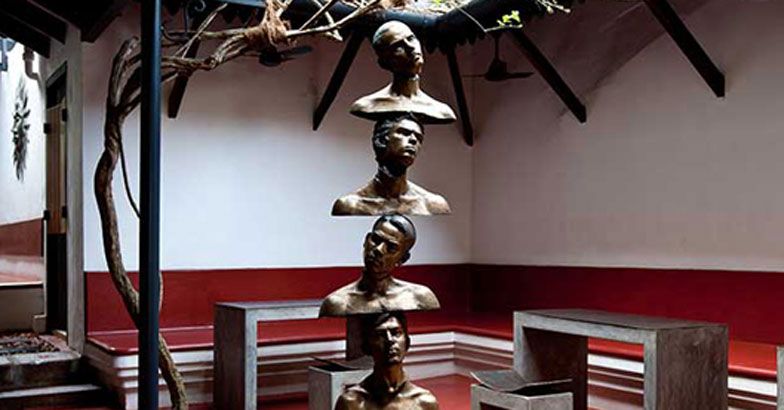 Kashi Art Gallery is an old Dutch house converted by Anoop Scaria and Dorrie Younger, it opened in 1977 with an exhibition by Mr.C V Ramesh. Over the last 12 years Kashi Art Gallery and Café became the hub of Kochi’s contemporary art scene and the most popular hangout in the area for young locals and tourists. The gallery has held some of the most important contemporary art exhibitions in Kochi, showcasing the work of artists such as NN Rimzon, Sosa Joseph, Zakkir Hussein, Valsan Koorma Kolleri and Anant Joshi. In 2012 Edgar Pinto took ownership and worked with restoration architect Karl Damschen and designer Marc Delrome, to renovate the property whilst keeping heritage status intact, including the menu. The café contains a permanent collection of artworks by the likes of Christina Mamakos, K S Radhakrishnan and Pradeep Naik. Kashi Art Café is located on Burgher Street, Fort Kochi and has been loaned to Kochi-Muziris Biennale by Edgar Pinto. 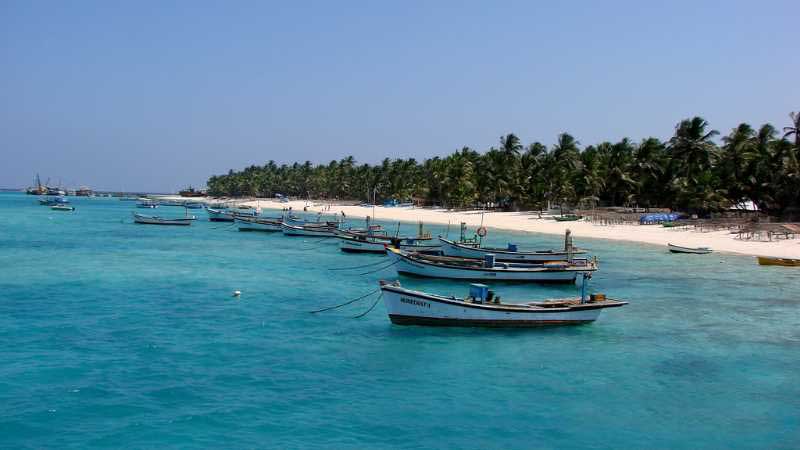 Willingdon Islands is the largest artificial island in India, which forms part of the city of Kochi, in the state of Kerala, India. Much of the present Willingdon Island was claimed from the Lake of Kochi, filling in dredged soil around a previously existing, but tiny, natural island. Willingdon Island is significant as the home for the Port of Kochi, as well as the Kochi Naval Base (the Southern Naval Command) of the Indian Navy and Central Institute of Fisheries Technology, a constituent unit of Indian Council of Agricultural Research. The island is also home for other establishments associated with the port, namely, the Office of the Cochin Port Trust (that controls the Port of Kochi), the Customs Office, and more than two dozen export-import offices, warehouses, a few hotels and business centers. 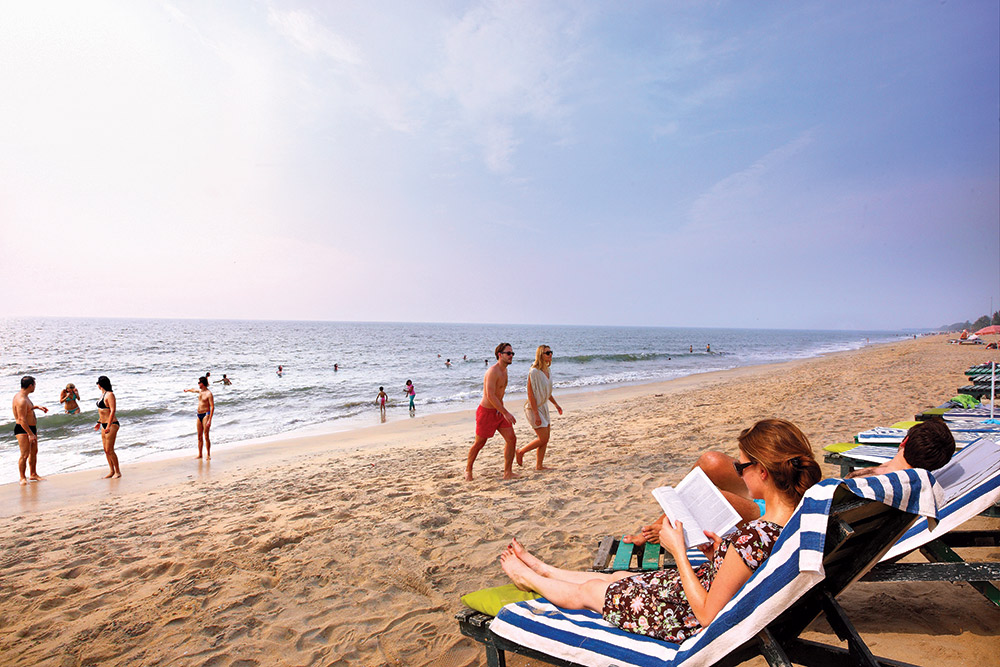 Cherai Beach is located in Kochi Taluk, Kerala, India. Cherai Beach is just 25 km from Kochi, and 30 km from Cochin International Airport. The nearest towns are North Paravur (6 km) and Kodungallur (10 km) and the nearest railway station is Aluva (20 km).

Flaunted as one of the excellent beaches in the state, Cherai beach is just at the distance of 30 km from the city of Cochin. Located on the north-end of the Vypeen Island in Kochi, a picturesque Cherai beach is a perfect blend of the sea and the backwaters. Dotted with seashells of several shapes and hues, this beach looks more beautiful with green groves and paddy field. Chinese fishing nets on the waterfront and thick coconut groves add charm to this place. This enchanting beach is one amidst the must-see spots for tourists. It has a coastline of 15 km, which makes it different from other beaches. Swimming and sunbathing are popular activities that make it a tempting option for someone to get away from the clamor of city life. 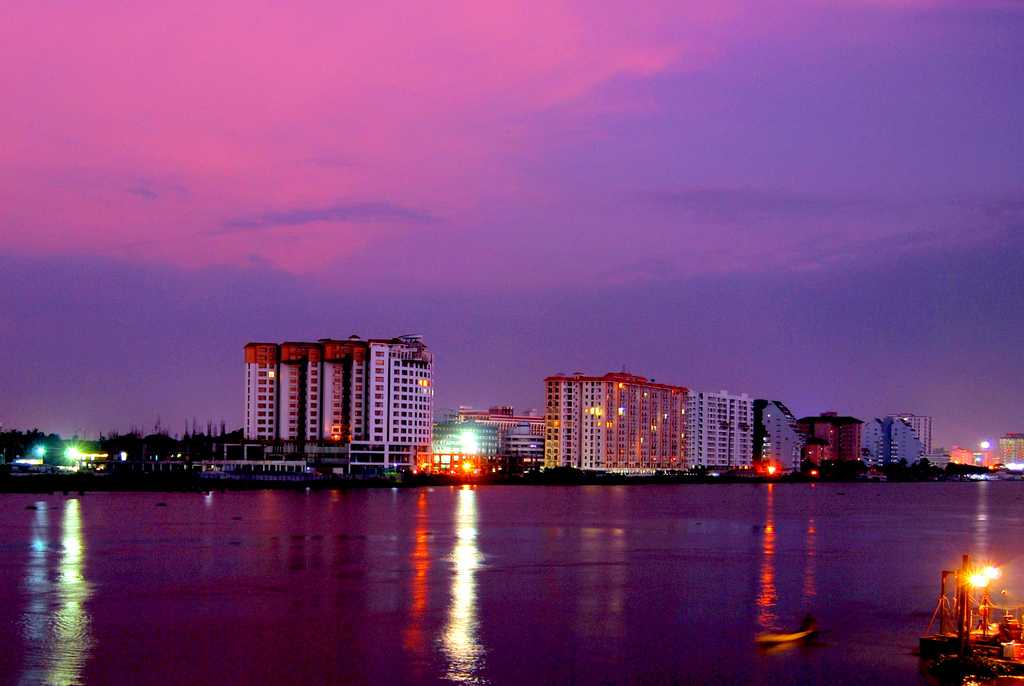 Marine Drive is a picturesque promenade in Kochi, Kerala, India.[1]It is built facing the backwaters, and is a popular hangout for the local populace. Ironic to its name, no vehicles are allowed on the walkway. Marine Drive is also an economically thriving part of the city of Kochi.With several shopping malls it is as an important centre of shopping activity in Kochi. Major fast food joints, including Marrybrown, DiMark, Coffee Bar are present along the walkway. The view of the setting and rising sun over the sea mouth, and the gentle breeze from the Vembanad Lake has made Marine Drive an important tourist destination in Kochi. Hundreds of people (both natives, and tourists) throng the walkway during the evenings. The walkway starts from the High Court Junction and continues until the Rajendra Maidan. There are also several boat jetties along the walkway. 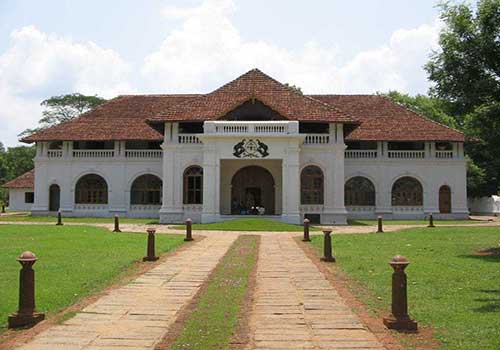 During the early decades of the 16th entury, the Portuguese had plundered many temples in Kochi. In 1555, they built the palace and presented it to King Veera Kerala Varma with the hope of establishing trading relations with the kingdom. When the Dutch arrived in Kochi much later, they renovated the building. The palace is a two-storeyed structure, built in traditional Kerala naalukettu (quadrangular) model with four separate wings opening into a central courtyard. While the central courtyard houses a temple of the royal deity Pazhayannur Bhagavathi, the two other temples situated on either side of the palace are dedicated to Lord Krishna and Lord Shiva. Outside, the palace looks simple, but elegant with the white walls on the front and the sloping roof. Long and spacious halls, arches etc are another characteristics of the palace. The ground floor harbours the ladies room with a staircase to the kanithalam room. The square shaped Coronation hall, royal bed chamber, dining hall, assembly hall and the staircase room are situated on the upstairs. 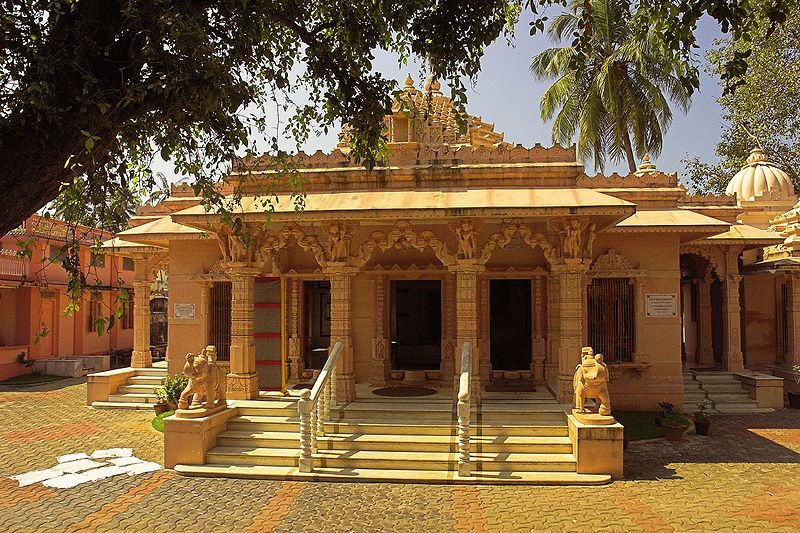 Bhagavan Shri Dharmanath Jain Temple is a famous Jain temple located in Matancherry, Cochin in the state of Kerala. Jainism came to Kerala in the 3rd century after Chandragupta Maurya travelled to Shravanbelagola in Karnataka. Their followers travelled further South to Tamil Nadu and Kerala in search of places of solitude for their penances and meditations. Some of the local Kings also offered royal patronage to Jainism. The temple is dedicated to Lord Dharmanath the 15th Tirthankar. Most of the Jains migrated to Kerala from Rajasthan and Gujarat for the purpose of business. The temple is over 100 years old and has a lush green background with coconut and other trees standing as if to welcome visitors. It is an ideal place for spiritually healing or meditating and the holiness and sublime atmosphere increases the faith and devotion of the devotees. They gain inner strength and the ability to face life’s troubles with equanimity which leads them further on to the goal of life namely self realisation and enlightenment. 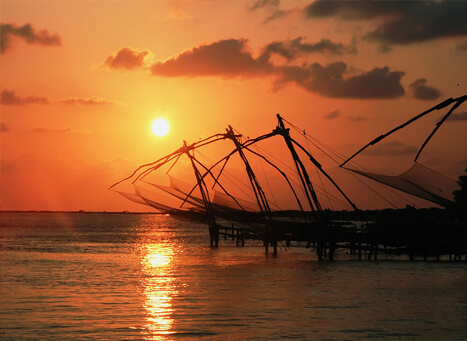 The huge cantilevered Chinese fishing nets that that droop towards the waters like over-sized hammocks have become a hallmark that represents Fort Kochi on the tourist map. Once just a fishing accessory, it is a now a big bait for tourists.Chinese fishing nets - Cheenavala in Malayalam - is believed to have been introduced in Kochi by Chinese explorer Zheng He, from the court of the Kubla Khan. The fishing net established itself on the Kochi shores between 1350 and 1450 AD. The sight of the Chinese nets, suspended in mid air and standing in line on the beaches, when silhouetted against the sunset is breathtakingly beautiful. It is, undoubtedly, one of the most photographed sights in Kochi. The Chinese nets, made of teak wood and bamboo poles, work on the principle of balance. Each structure, about 10m high, is fixed on the beach and has a cantilever with an attached net that is spread over an area of about 20 meters. Counterweights, usually stones about 30 cm in diameter, tied to ropes of different lengths, facilitate the working of the nets. Often, lights, attached to the teak posts. are suspended above the net to attract fish.